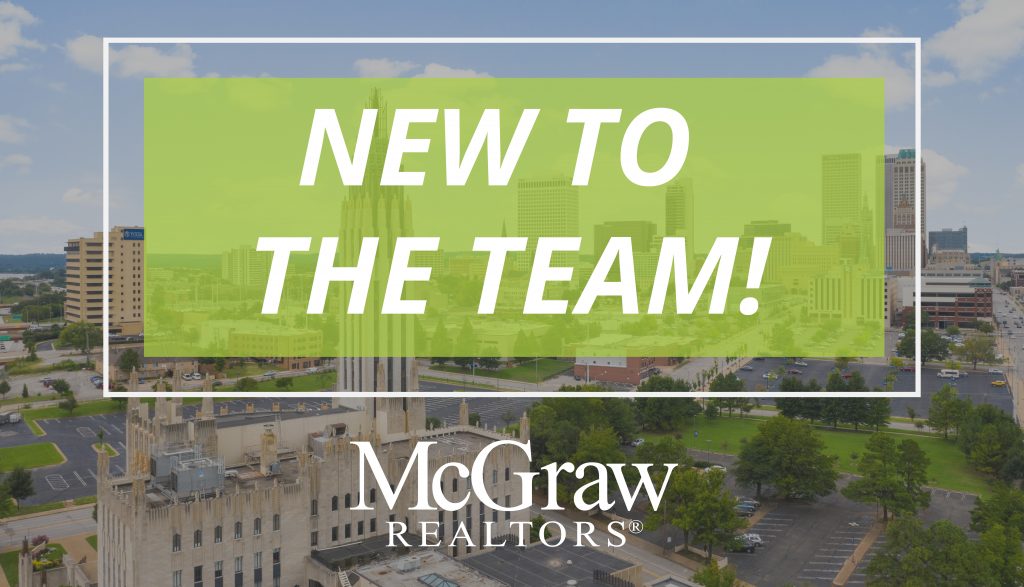 The new year is barely two months in and we are heating up at McGraw! We have added several new agents since the beginning of the year, and are excited about the future.

HERE IS WHAT YOU NEED TO KNOW ABOUT EACH NEW AGENT.

Anna Brooks has joined McGraw REALTORS® Rockford Office. Brooks was born in Santa Monica, CA, but grew up in Tulsa, graduating from Booker T. High School. She went on to earn a Bachelor of Arts in Journalism with a Minor in French from the University of Oklahoma, and from the University of Tulsa College of Law, J.D.

Brooks joined McGraw REALTORS® at the end of 2019. In her spare time, she enjoys spending time with her children, water skiing, being outdoors, and cooking. When asked why she chose McGraw, Brooks said, “I was so impressed with the realtors I know that work with McGraw that I wanted to be a part of it!”

Emily Burke has joined McGraw REALTORS Rockford Office.  Born and raised in Tulsa, OK, Emily went on to study international business, Spanish and Italian in Virginia.  Having lived in various markets, such as Chicago and Washington DC, she is familiar with how Tulsa compares nationally and is excited to share her experience in her hometown.

Having worked for Yahoo! and Monster Worldwide, Emily has vast experience in digital advertising and negotiations with Fortune 500 companies.  She uses her seasoned sales and marketing experience investing in real estate for short and long term rentals.  She is very excited to utilize her negotiation skills to find the perfect home or investment property for you.

Lindsay Farrar has joined McGraw REALTORS® Rockford Office. Farrar was born and raised in Tulsa, Oklahoma and graduated from Bishop Kelley High School. She attended the University of Tulsa, and worked with for her mother’s interior design and home staging company, Simply Staging. She obtained her real estate license in the Fall of 2019 and joined McGraw.

In her spare time, Farrar enjoys art and volunteers at the Philbrook Festival of Trees. She is a Girl Scout troop leader, and part of the Eliot Elementary Grounds Committee.

Anthony Wineland has joined McGraw REALTORS® Memorial Office. Wineland was born and raised in Northeastern Oklahoma and graduated from Haskell High School. From 2012 to 2019, Wineland lived in Wagoner, Oklahoma and worked from 2017-2019 as a paraprofessional with Wagoner Public Schools before moving back to Bixby in May 2019.

In his spare time, Wineland enjoys spending time with his wife and three children. He enjoys time outdoors camping or going to the lake, and is an avid hockey and football fan.

Scott Perry has joined McGraw REALTORS® Memorial Office. Perry was born and raised in Houston, TX, and graduated from Sam Houston State University with a degree in Criminal Justice with a minor in Spanish. After several years as a construction manager, Perry obtained his Oklahoma real estate license in 2008, and his after moving to Texas obtained his Texas real estate license in 2013.

In 2018, Perry moved to Sapulpa, OK and reactivated his Oklahoma real estate license. He is the owner of Radiata Investment, which owns several investment properties in the Tulsa area. In his free time, Perry is an avid scuba diver, enjoys the outdoors, spending time with his wife, and their five rescue dogs.