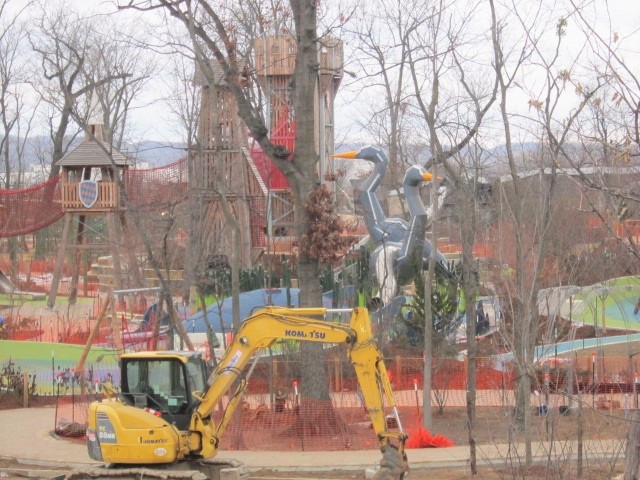 Walk- and bike-friendly communities have become more than just a popular idea. They are now the norm in cities around the globe. Walkability has transformed neighborhoods into sustainable places where residents enjoy health and fitness as a way of life, not just a utility. It fosters a sense of community by providing useful, convenient and safe places to visit—all in an environmentally friendly lifestyle.

Since 2014, Riverside Drive has been closed from 21st to 41st, in an effort to create just such a place on Tulsa’s Riverside Drive. Over 66 acres are being transformed into Phase 1 of the park.

It goes without saying that a large city rejuvenation project like Gathering Place, Tulsa’s Riverfront Park causes inconveniences during construction—not just for those who live close by, but businesses too. It’s noisy and affects patrons and thus business traffic and well as street traffic.

But, (and that’s a BIG but!) . . . large sacrifices like the one our city is making will be worth the trouble and the wait. There has not been anything like this in Tulsa since . . . well, I’ve lived here all of my life and I’m going to jump out there and say, since . . . EVER!

Gathering Place, Tulsa’s Riverfront Park will be just that: a place where people will WANT to gather, to spend time together, to enjoy Tulsa’s views, sights, sounds, weather and so much more. It will anchor communities, increase Tulsa Real Estate values, bolster area businesses, and improve Tulsa’s social activity and economic sustainability. Two more phases are scheduled to complete the project, increasing the finished size of Tulsa’s Gathering Place to 100 acres.

In the neighborhoods backing up to the park, new home construction is on the rise with home values ranging from $600K to $800. Renovations to existing homes valued in the range of $300K to $1 million are commonplace.

Are you a business owner in the area? Local restaurants and stores could see $5 million in new annual sales due to the park.

There will be many major improvements to increase Tulsa Real Estate values in the surrounding neighborhoods. Here are just a few:

The One Secret Your Family Will Love

So what’s the big little secret?  (I will tell you, but you must promise to keep it a secret with me.)

There is a footpath that only a few people know about. After making me swear not to reveal its location, McGraw agent Mike Keys agreed to take me on this trek. Donning our tennis shoes, we followed a footpath up a hill, to a ridge where we could look down on the park. Like a secret city teaming with life, the park was full of equipment and workers busily going about their tasks, unaware of our presence. I saw the 5-acre Adventure Playground, Mist Mountain, sports courts, bike and skate parks, nature trails, and large grassy areas for concerts. I saw two giant water birds guarding the children’s water park. I saw the lodge, a boathouse, Peggy’s Pond and two land bridges connecting the two sides of River Parks. There are tunnels through which traffic will pass, and over which pedestrians will stroll on grassy, landscaped knolls.

Mike, who lives nearby and is an expert on the Real Estate market surrounding the park, often comes here with clients and friends. “Until I bring people here they don’t realize the enormity of this project,” Mike said to me. “When I tell them that we will have the largest privately funded park in the history of the US right here in Tulsa they are amazed!” he said.

He pointed to the playground equipment and told me that it was imported from Germany. He explained that Germans believe that children should be challenged on playgrounds, so they build their equipment filled with natural products in a unique style. This new playground is unlike any other in the US.

He pointed down the river and said, “In the last city voting, it was approved to continue Vision 2025 which will allow two low-water dams to be built to have full-time water in the river – hopefully, to begin in the next 2 years.

“All of this will stimulate the local economy and attract people and businesses to relocate to Tulsa, which will further enhance Tulsa’s Real Estate market.”

Maybe, if you are lucky, and if you promise not to tell, Mike will show you this secret location too! But if you must wait, know that the inconvenience and sacrifice is worth the wait—for your family, your well-being, and your pocketbook.