In 1938, Tulsa businessmen Dan Davisson, Jr. and Kenneth Crouch came together to start a real estate company focused on serving the Tulsa community. Crouch Davisson formed and served Tulsa for the next several decades. Local builder Lee Mulhall joined the firm in 1946, forming Crouch Davisson Mulhall, the company that a young Joe McGraw would join in 1961. Eventually, Joe would form his own real estate firm, McGraw Breckenridge, and through the 1970s and much of the 1980s would serve the Tulsa Area. It was in 1986 that what would become McGraw REALTORS® formed as Crouch Davisson Stewart merged with McGraw Breckenridge to form McGraw Davisson Stewart, a name still associated with McGraw REALTORS® to this day. Through the 1980s and 1990s, McGraw continued to grow and expand in Tulsa and Northeastern Oklahoma, with new offices opening in Owasso, Broken Arrow, and Langley, Oklahoma as the 1990s gave way to the early 2000s.

In 2001, after more than two decades at the helm, Joe McGraw brought local developer and friend, John Woolman in as President and CEO to lead McGraw REALTORS® into the 21st century. Over the next fifteen years, Woolman would help the company continue to grow into a full-service brokerage, adding a commercial real estate division in 2008 and a property management and leasing division in 2011.

By 2017, the real estate industry had changed dramatically - fueled by the internet age and rapid expansion of technology in the industry. With this changing landscape in view, company President John Woolman announced that longtime partner, Bill McCollough would be stepping into the role as President and CEO. In addition to his years of experience as a real estate developer in Texas and Oklahoma, McCollough brought his forward-thinking, tenacious leadership, and desire to see McGraw REALTORS® thrive as the company moves toward 100 years of service.

Over the last three years, McGraw REALTORS® has grown exponentially. In May 2019, the company partnered with Winfield Property Management, a local multifamily property management company with more than 20 years in the industry and over 3,000 doors under management. Then on January 20, 2020, McGraw REALTORS® announced the acquisition of Anderson Properties in Oklahoma and Arkansas, adding more than 300 new associates and a dozen new locations in two states. That growth has continued through 2021 with the addition of offices in Bentonville and Hot Springs, AR, Nichols Hills and Weatherford, OK, as well as Colorado Springs, CO.

For more than 83 years we have been helping make real estate simple for our clients, and working to give our associates the best tools and resources the industry offers so they can thrive in their real estate careers. We are proud of where we have come from and excited about what the future has in-store. We are committed. We are loyal. We are tenacious. We are McGraw. 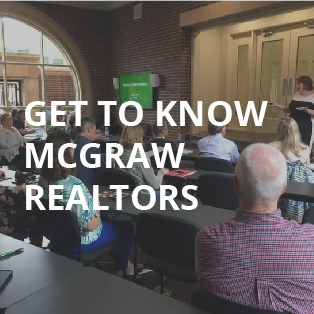